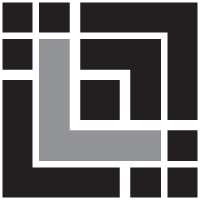 Please note that as of September 26, Lamont Law has moved to a new office location at 44 Charlton Avenue West Hamilton, ON L8P 2C1 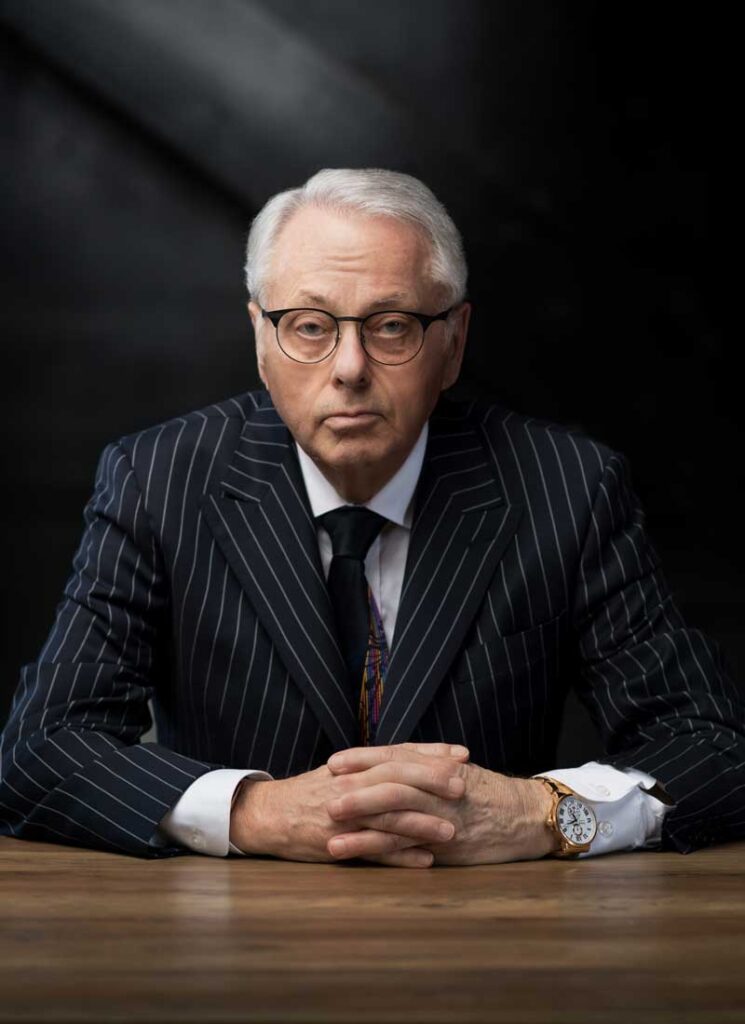 Michael Lamont graduated from the University of Guelph in 1970 with a Bachelor of Arts degree, majoring in Economics. Following his undergraduate experience, he attended the University of Western Ontario, graduating with a LLB in 1974. In 1976, Michael was called to the Bar. In the early days of his career, Michael practiced in both criminal law and civil litigation. Over the past 40 years, Michael has honed his skills as a personal injury lawyer advocating for victims who have been harmed by no fault of their own. Because of Michael Lamont’s experience and expertise, he is recognized as a Certified Specialist in Civil Litigation by the Law Society of Ontario.

Born and raised in Hamilton, Ontario, he is one of eight children raised in a single income home where his father was a union worker in one of the large steel mills in the city. Michael’s mother was a stay-at-home mom who was very proud of Michael’s accomplishments. Having strong roots in Hamilton, Michael is a proud supporter of many local charities and organizations. In 2016, Michael was awarded the John F. Evans Award of Community Distinction. He believes in giving back to his community and encouraging the revitalization of the city he loves, Hamilton.

Michael Lamont has built a law firm with a team of experienced attorneys and paralegals who advocate for their clients in an effort to resolve their cases quickly and efficiently. At Lamont Law, the personal injury lawyers and paralegals understand the law and the legal hurdles faced by accident victims. The team at Lamont Law strives to ensure their clients are informed throughout the litigation process. 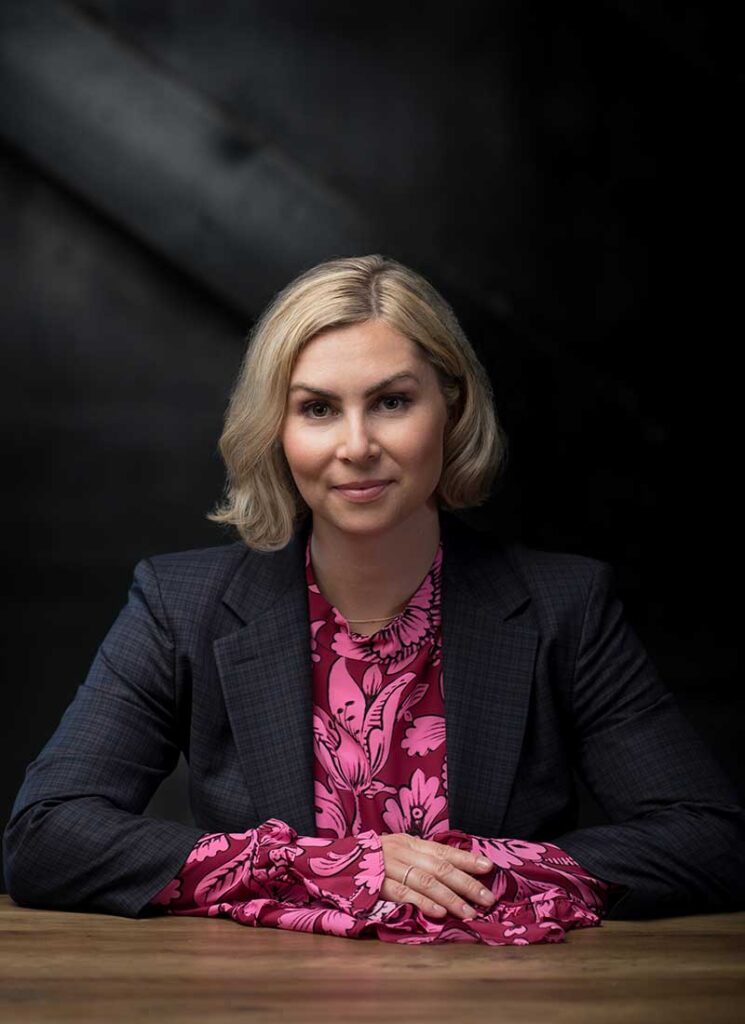 Erica is a personal injury lawyer, born and raised in Hamilton, Ontario. She attended the University of Waterloo, obtaining a Honours Bachelor of Science Degree in Science and Business, specializing in Biochemistry with a minor in Economics. After her undergraduate degree, she attended the University of Calgary where she earned a Masters of Science degree specializing in Biochemistry and Molecular Biology.

After graduating, she took a brief hiatus to work at a prominent department store in Calgary, where she worked with wonderful people, surrounded by beautiful things, and enjoyed the “fun” of a retail environment. Before long, she decided to look to the future. Throughout her experience and her educational journey, she kept circling the field of law. With a background in science, Erica believed she could use her knowledge when reviewing client’s medical information and building a case. She returned to the University of Calgary and graduated with a Juris Doctor in 2013. Prior to joining Lamont Law, Erica articled at an insurance defence firm in Hamilton. Erica was called to the Bar in 2014.

She knew she would be a good fit at Lamont Law because Michael Lamont was not only her dad, but also her first employer. He believed in demonstrating a strong work ethic with his children, and she started answering the phones for the Hamilton law firm and running errands when she was 14 years old. She is trying to inspire the same work ethic with her three boys, who come to “work” on PA days.

Erica is a conscientious litigator who advocates for her clients while treating them, and their families, with compassion and respect. Her practice includes all areas of personal injury law including motor vehicle accidents, motorcycle accidents, pedestrian/car accidents, trucking accidents, bicycle accidents, slip and fall accidents, dog bites, dog attacks, and medical negligence. Additionally, Erica advocates for individuals who have been denied long term disability.

Erica advocates for those who have been injured due to no fault of their own, and family members of accident victims, as they attempt to deal with life changing circumstances such as catastrophic injuries, spinal cord injuries, brain injuries, fractures, scars, and other serious injuries, including mental illness, anxiety, and cognitive changes.

Have you or a loved one been seriously injured through no fault of your own? Call our Hamilton law firm today for your free consultation. 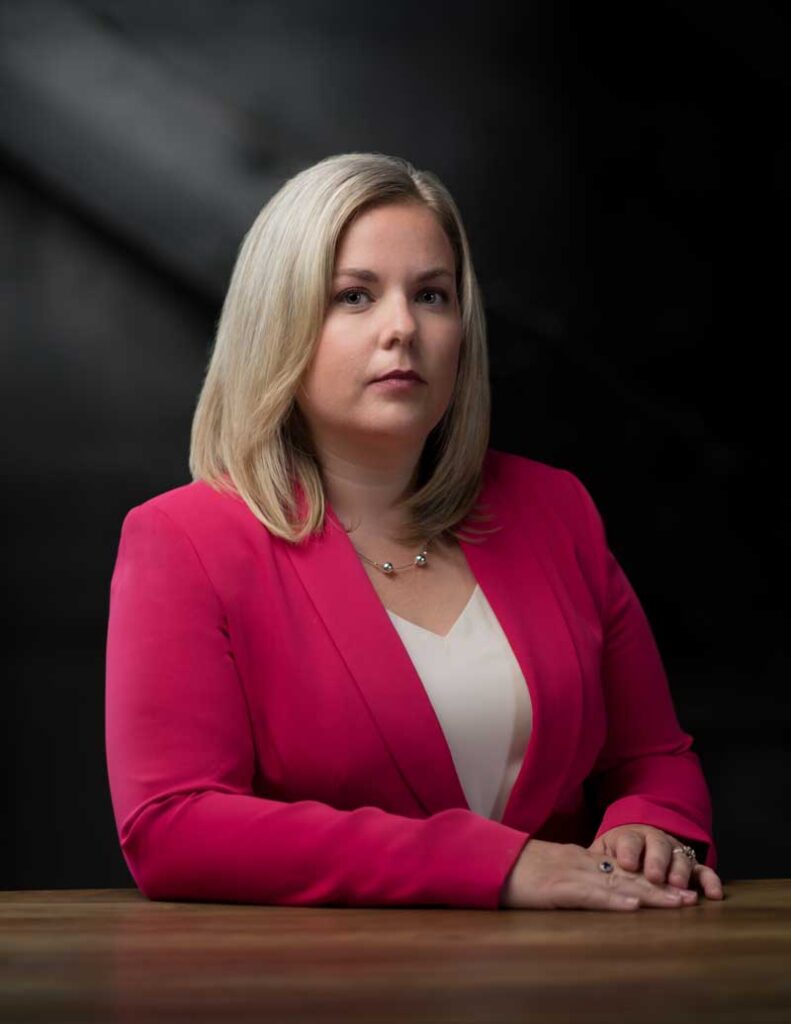 Born and raised in Scotland, UK, Laura moved to Canada in 2008. Laura earned her L.L.B in Scots Law from the University of Glasgow, Scotland, in 2007. After moving to Canada, she completed her NCA qualifications at the University of Toronto. Laura was called to the Bar in 2012.

Laura chose a career in law in order to help those most vulnerable. Laura joined Lamont Law in 2018, after five years at another Hamilton civil litigation firm. Laura practices exclusively plaintiff civil litigation with experience in all aspects of Life and Disability claims, wrongful or constructive dismissal claims, accident benefit matters as well as claims resulting from auto accidents, slips and falls, WSIB claims and brain and spinal injuries.

Laura is the Professional Matters Chair and a Trustee of the Hamilton Law Association. Laura is also the Vice-Chair of the Ontario Trial Lawyer Association’s Women’s Caucus.

Laura is passionate about her home community of Brantford and enjoys volunteering with several great organizations in Brantford, Hamilton, and surrounding areas. 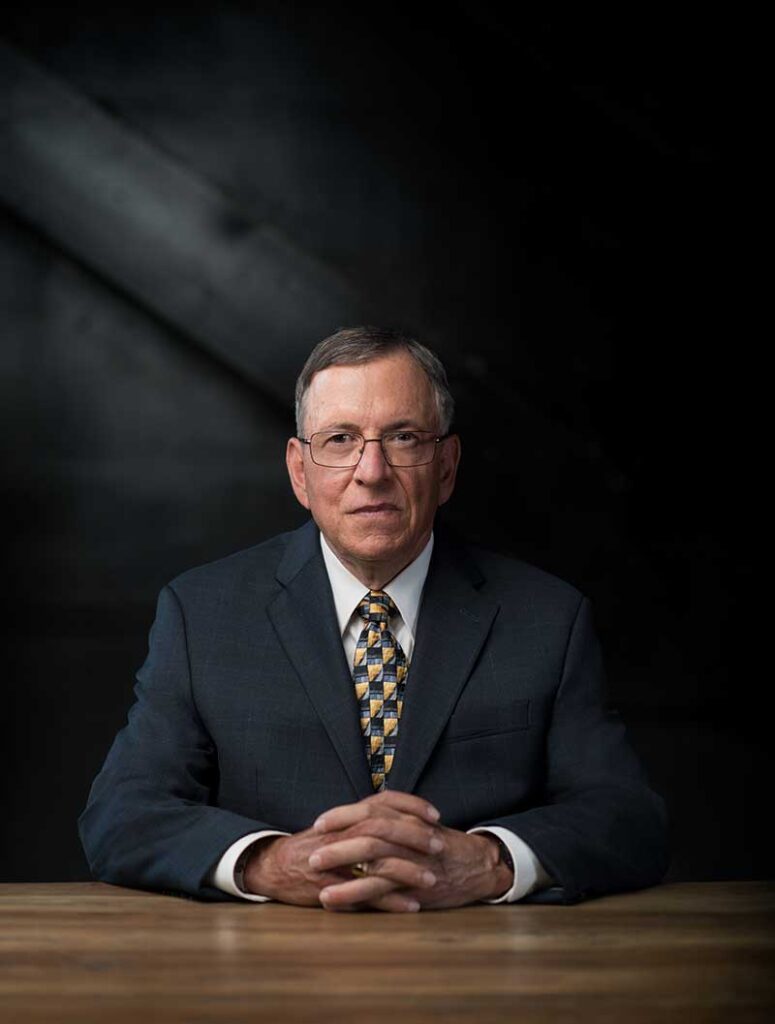 Jack Fitch brings over 40 years of litigation experience to Lamont Law. Certified as a specialist in Civil Litigation by the Law Society of Ontario since 1993, Jack has been frequently recognized by Lexpert as a leader in commercial insurance and personal injury litigation, and has also been ranked as a distinguished lawyer by Martindale-Hubbell. Jack has been named one of the top 100 litigation lawyers in Canada by the Globe and Mail. In 2017, Jack was recognized by the Ontario Trial Lawyers’ Association for his contribution to the defence of personal injury cases.

Jack has extensive experience representing both Plaintiffs and Defendants in serious personal injury lawsuits in Hamilton and Greater Toronto Area, including many sexual abuse claims. He has represented clients in matters before all of the civil courts in Ontario and the Superior Court Trial Division in the Province of Nova Scotia, has conducted many trials both before Judges alone and before Jury’s, and has frequently appeared in the Ontario Court of Appeal. Jack has also successfully defended several applications for leave to appeal to the Supreme Court of Canada.

Many of Jack’s cases have been widely reported both in the law journals and the public press. Jack has acted in estate and commercial cases as well as personal injury and a wide variety of insurance cases. He has also appeared before many administrative boards and tribunals including the Workplace Safety and Insurance Appeals Tribunal, the Financial Services Commission of Ontario, the License Appeals Tribunal of Ontario, the Law Society of Ontario Discipline Committee, the Real Estate Commission of Ontario Discipline Committee, the Discipline Committee of the Toronto Real Estate Board, the Liquor Licence Board and the Toronto Historical Board.

Jack has completed courses in advanced mediation skills and is an experienced commercial and insurance mediator. In 1995, Jack was retained to assist in the design and implementation of an alternative dispute program created to address claims of sexual and physical abuse arising from the operation of a training school. Through that program and related civil actions which Jack has defended, over 600 claims of abuse have been resolved. Jack has been involved in the development of alternative dispute mechanisms in other mass tort cases.

Jack is available to provide counsel services including attendance at mediations, pretrials, trials and appeals or to serve as a mediator in complex civil claims. 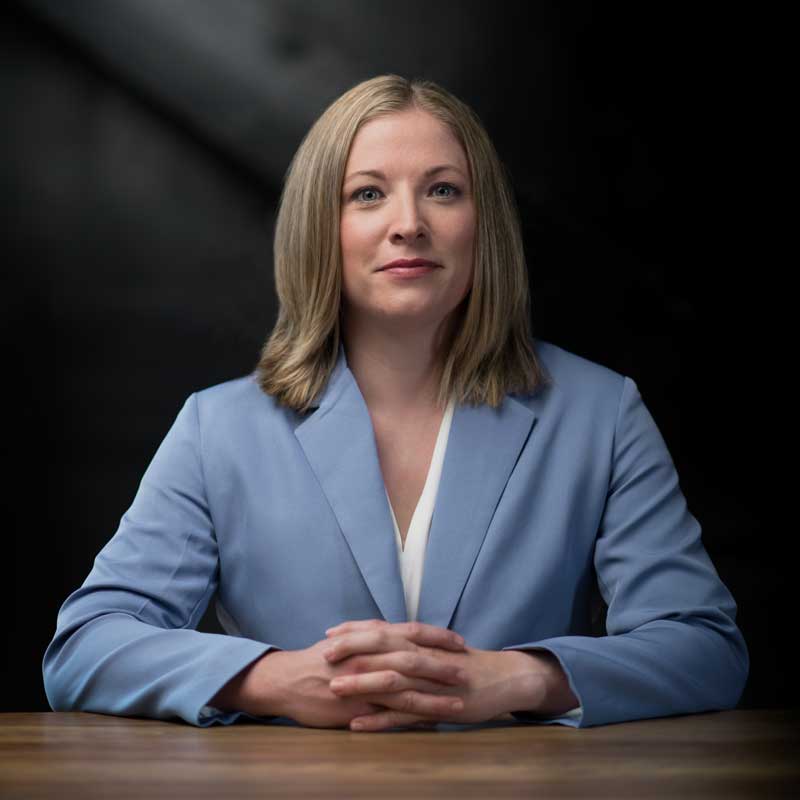 Carrie joined Lamont Law in 2004 as a co-op student working towards her law clerk designation. She has since become a member of The Law Society of Ontario as a licensed paralegal. 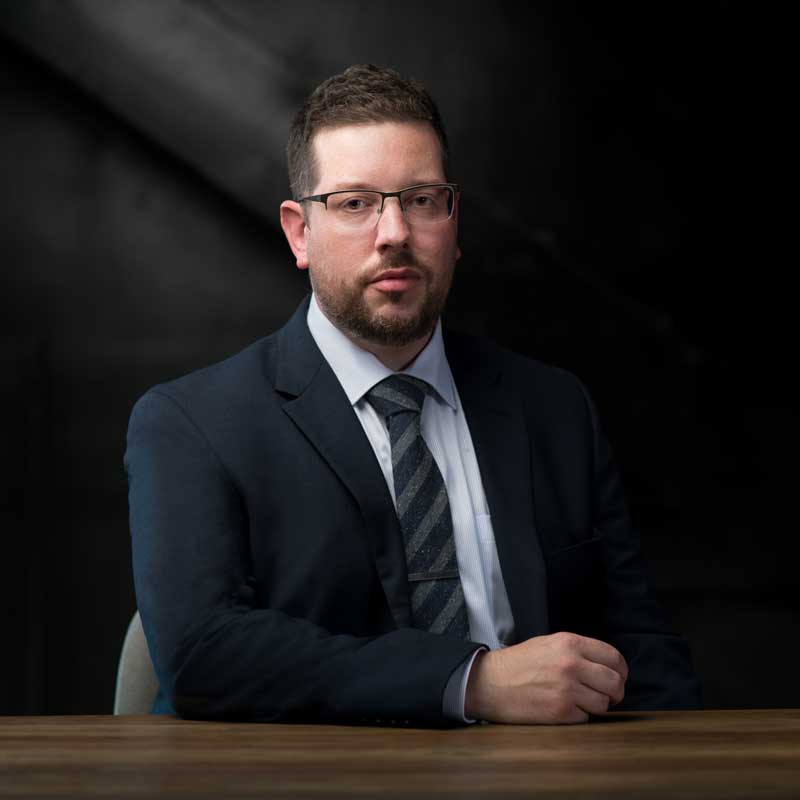 Phil immigrated from the UK to Canada in 2016. He was previously a high school teacher in the UK, and upon his arrival in Hamilton, made the decision to pursue a career in personal injury law.

Originally a co-op student at Lamont Law and now a Licensed Paralegal, Phil works in both Accident Benefits and Tort; dealing with clients, treatment providers, and insurance adjusters.

In his spare time, Phil enjoys spending time with his wife and two sons.

Have you or a loved one been seriously injured through no fault of your own? Call our personal injury attorneys today for your free consultation. 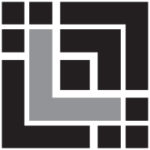